Today we are talking about “Traditional home making skills”. Traditional home making skills, such as baking, sewing and preserving are having a revival after decades of decline, a new survey by a UK based home interior website has revealed. The popularity of food and DIY TV shows as well as an abundance of online tutorials, books and magazines has seen a big rise in the number of people wanting to learn these traditional skills.

The survey, commissioned by Baytree Interiors asked a series of questions to 1,000 UK residents about learning new skills as well as their interior style preferences. They found that a traditional way of living was becoming popular, with participants stating that they had recently learnt or planned to learn some classic skills such as baking, sewing and knitting. The survey also found that people wanted to move away from modern interiors, instead opting for traditional, country or rustic furniture and interior design.

The survey asked, “Have you recently learnt or would you like to learn one of these traditional skills?” and were asked to choose from a list of six activities. 31% of participants chose baking as their favourite hobby. 21% expressed the desire to learn sewing and altering clothes and 12% said that they wanted to brew their own alcohol.

Although both men and women picked baking as the number one skill they wanted to learn, there were some stereotypical differences in the answers given. Sewing and knitting came high on women’s lists, whereas woodworking and brewing came high on men’s list of new skills.

The participants were then asked how they learnt their new skills, and unsurprisingly a staggering 43% said online. Learning skills from other people came second on the list with 29% of the vote, while books and courses/workshops also proved popular for learning new skills.

Over the past few years the internet has become a great resource for learning new skills, with popular video sites such as YouTube and Vimeo filled with helpful tutorials, as well as people passing on their knowledge on a range of diverse subjects through websites, forums and blogs.

To see if the previous results were a part of a bigger lifestyle change, Baytree Interiors also asked participants which style of furniture they would most like to have in their homes. 61% of respondents shunned modern design, opting instead for traditional, country cottage or rustic interiors.

A spokesperson from Baytree Interiors had this to say about the survey:

“It’s clear from the survey results that people are once again embracing traditional lifestyles and want to learn new skills that can help around the house. What’s more, the survey showed that it was in fact technology that is allowing people to learn these new skills through a range of diverse websites, video tutorials and step by step guides from around the internet.”

Adding, “It’s also great to see that people are not just learning these traditional skills, but are also embracing the lifestyles too through their home interior choices and, in some cases, their clothing choices too.” 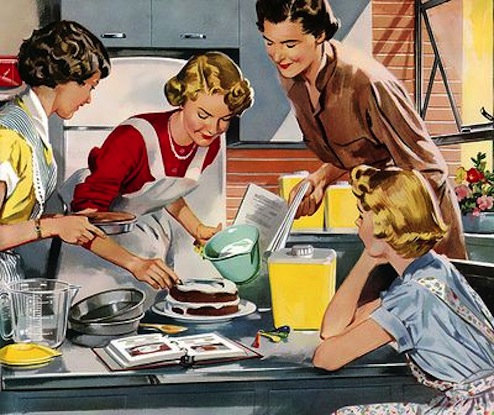 I myslef, have learned a lot from my own mother growing up. She was a great homemaker and evern worked outside the home as well. I look back and I don’t know how she held down a full time job, four kids, and kept up with the home, the kids, the errands, the yummy meals. None the less, I wathced her, and embraced things from her, and I know so much because of her great influence. I love being a domestic homemaker myself, and I take pride in taking care of the home, or whenever I cook a meal that my family Ohh’s and awe’s over. A big pat on your back to all you hard working homemakers.

Bathroom Upgrade Ideas and Inspiration for Your Nebraska Home

How To Save Up On An Electricity Bill Where You Live

Simple Steps To Automate Your Home